The past couple of weeks have been very humbling for me and the Toronto Blue Jay franchise.  I’ve been tied down with late hours at work, and the Jays have virtually given up on the season after being belittled in the majority of 10 crucial games against the Yankees and Rays.  I can’t really blame those losses on anything – it was just a good, old fashion beating we took from some very good clubs.  The players that impressed me those series were Jeff Niemann of the Rays, who looks like a very good young pitcher with a live fastball and great slow curve and Hideki Matsui of the Yankees, who started out rough, but looks to be turning it on now.

For the Blue Jays it is the same old story – we show glimpses of competing, but end up falling out of contention.  Seen this before.  The solution, for many in this circumstance, is to trade our best player with the shortest contract status.  A solution that – to the dismay of most Jay fans – has not been taken advantage of in past years.  Two years ago the Jays elected re-sign Vernon Wells when they had sureshot deal in place for Ervin Santana of the Angels.  We also elected extend Alex Rios after a ‘flash in the pan’ 2007 season.  2007 saw Rios hit peak value, almost garnering a trade for 2008 NL Cy Young winner Tim Lincecum.   To make a long story short, Rios has not nearly lived up to his performance in ’06 and ’07.  He and Vernon Wells have combined to account for a ‘big waste’ in the Blue Jays payroll.  Not to mention B.J. ‘freakin 15 Million for nothing’ Ryan!!!!  But I disgress.

Blue Jay fans I feel your frustration.  I feel the pain, and I know how in this situation, a trade of Roy Halladay might be a solution.  I can see that, but I do not agree with it.

I strongly believe that this way of thinking is a ‘BIG MISTAKE’ for the club.  We are just going to have to eat this one!  Of the numberous wastes of payroll, mention previously, Halladay is not one of them.  He won’t be one of them for a very longtime now.  Halladay is a surefire Ace, and it is not like we can’t afford him?  Halladay is money well spent.  Trading Halladay would be punishment for the previous mistakes with Wells and Rios.  It would seriously pain me to be stuck with them, and gone with Halladay.  The pain would be overwhelming.

Wells, Rios, Overbay and even Ryan (having to eat Ryan contract for next year) won’t come off our books for a while now.  Yes, I understand the frustration.  We are stuck with those guys for at least another 2 or 3 years.  We have to eat it!  Whatever pitcher we get in return for Halladay, will most certainly not be on Halladay’s level, and whatever hitter we aquire will probably take some time to pan out in the bigs.  Halladay is a fan favorite, an amazingly well respected player and a guy with the heart of a champion.  The Jays will lose fans over this, no doubt.  If Roy actually asks for a trade, then that is another thing, but I think it would be a mistake not at least to try and invest in a player of his caliber.

Talk about irony!  A couple days before ‘the J.P. possibly shopping Halladay story’ broke, I personally made an investment in Halladay.  A pretty big investment considering these circumstances.

I bought a lifesized ‘Fathead’ wall poster of Halladay for my room.  I know ladies, you love the room, lol.  I was all about to post on here about how cool my room looks now until the news broke.  Not so cool after this happened.  What am I going to do with this if Halladay gets traded?  It actually cost me over 100 bucks U.S. charged to my credit card.  If I can make that kind of investment in a Jays player, the club should do the same!

I’m a man torn between my love the Jays and my admiration for … who am I kidding?  Love for Halladay!  I’ve come to the conclusion that I will become a temporary fan of whatever team he gets traded to.  ‘Doc’ will always be my favorite player of all time, and I will resent the Jays for trading him.  How long?  I don’t know?  I can’t tell you all how upset I am over this whole situation.  If Halladay gets traded, that enormous Fathead in my room will no doubt haunt and torture me for the rest of my life.  Maybe I’m being a little too dramatic now, but I’m pretty upset!  And the fact that this whole thing broke a couple days after I placed this poster on my wall!!!  Really upsetting!  Everything I love leaves that wall anyway.  Are the Blue Jays purposefully trying hurt me as a fan?  That is my question!

Maybe It Is Trick

If I can take one positive away from this situation – it is the way teams all across baseball are gushing over the opportunity to get Halladay.  They are all talking about how good he is, what they do to get him, and how if they did get him, they’d be propelled immediately to World Champion status.  Yes, Roy Halladay of the Toronto Blue Jays is awesome, better than any pitcher you have!  You need him.  You really do.  Thank you for validating that! … One thing though … ‘Ha, ha suckas you can’t have you him!‘

We just tricked every contending team in MLB to annointing Halladay the best pitcher in baseball.  Thank you for all those kind words.  He is the greatest, we are glad we have him!

I hope J.P. is pulling that trick, because that is what I would do if I were him!  It would be a good consolation for the fans a struggling sub-.500 team.

On a Brighter Note

I got to go a game the other week and sit in the best seats I’ve ever sat in at a game.  I was directly above the Jays dugout – few feet away from the team.  My older brother Chris, where I get most of my baseball knowledge from, got a ball thrown to him from Blue Jay first base coach Dwanye Murphy.  There he is (below) admiring our seats. 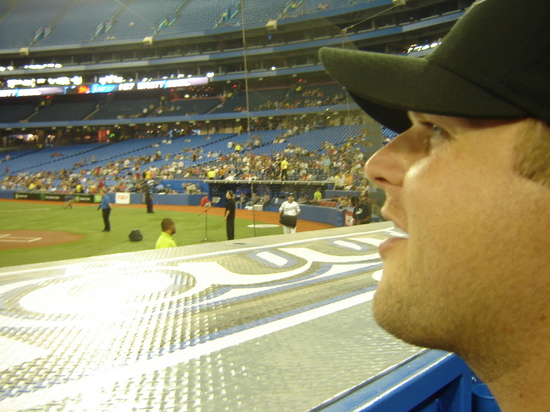 The Jays ended up losing a hard fought game to the Cinnicinati Reds.  Toronto native Joey Votto didn’t endear himself to Blue Jays fans going 4 for 5, with a homerun that night.  Anyway, amazing seats!  I felt like a king, and I ate great burrito after the game a place call Burrito Banditos on Blue Jay Way I believe.