Before the first game of a Jays/Yankees series this week, the Blue Jays announced that they accepted the wavier on Alex Rios from the Chicago White Sox.  Tomorrow the Jays will likely call up rookie prospect Travis Snider to take Rios place in right field.

I feel like like a ‘BIG’ weight has just been lifted off the Jays shoulders.  Some might be skeptical of the move letting Alex go for nothing, but the fact is that Alex Rios has been vastly underachieving in the outfield after the Jays inked him to a 7 year deal that will see Rios make around 60 million until 2014.  With the numbers Rios has been putting up over the last two seasons, he finds himself in a class mid-level outfielders not too much different than the Marlon Byrd’s, Jeff Francoeur’s, or Melky Cabrera’s of the world.  The only difference is Rios makes much more money than those guys.  At one time Rios looked to be a phenomenal young player with a very bright future.  I can’t fault J.P. too badly for giving him the deal, but to J.P.’s shigrin, it didn’t work out!!!

Out with the old and in with the new!  Exactly what this team needs!  The main reason why I like this so much is not mostly that I think Rios wasn’t a valuable player.  It has more to do with this guy and financial flexibility! 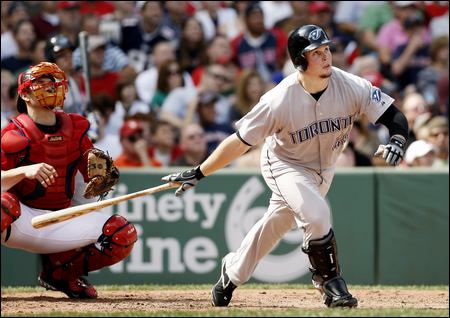 Travis Snider our Right/Left Fielder of the future!

The other important thing is monetarily this move frees the Jays up to do a lot more things in the future.  Like aquiring another outfielder and shifting Lind to first base?  Resigning Scutaro (granted I wouldn’t throw a lot of money at him)?  Finding a starter?  Catcher?  Anyone to mix it up a bit?

Snider might be a little too far away to make a big impact for the Jays in 2010, but I do like him as a staple in the outfield.  His outfield play may be a bit of a concern for me moving forward.  For right now, he has a decent arm and can fill in adequately of Rios.  I just want to see how much of a difference he will make with the bat??  Being a lefthanded hitter, it will be  a good fit for him to be thrusted rigth into the ‘lefthanding hitter heaven‘ that is the new Yankee Stadium.