In case you were wondering about the over use of CAPS and the exclaimation marks, Matt Holliday was traded to the St. Louis Cardinals today for promising thrid base prospect Brett Wallace.  What relevance does this have to a Toronto Blue Jay fan??

None whatsoever, but it stop some ill informed people from calling in to a Toronto sports radio station and asking, “Who did we get for him?”  Obviously confusing Holliday with Halladay.

There you have the Toronto baseball fan.  Always great comedy.

I’m suddenly growing a very bleak outlook on the Jays future.  With or without Halladay that is.  Recanting on what I posted earlier, trading Halladay is not as BIG MISTAKE of a mistake as I put it earlier considering Halladay will likely leave in 2010 if he Jays aren’t competing.  I personally don’t see them competing in 2010, so we pretty much have to pull the trigger on this deal.  Extremely sad to say, but true.  A bitter, bitter truth that is.  I would have liked them to hold onto the Doctor for that year, but now that all this has started in the media – there in no turning back.  It is obvious that these trade rumours will not stop until a deal is done.

Oh well, I missed my chance to see the Jays in the playoffs when I was 12 years old.  What I didn’t know is that I’d still be waiting till I was 27 to see it happen!  With Halladay being traded, no doubt that I’ll be waiting past my 30th birthday to see October baseball again in Toronto.

Wasn’t it untill last year that the Yankees lost the A.L. East for the first time in 13 years???  Awwwww … poor babies!!!

Should have played this whole thing cooler J.P.  That is all I have to say to him. 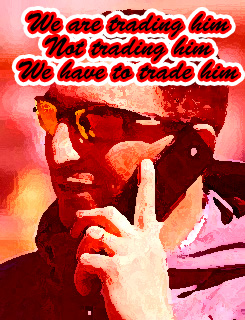