To my dismay, however, on Friday night I was in attendance for the start where the Jays ‘star pitcher’ came out early with a groin injury.  The extent of this injury is stilll unknown.  Being in attendance, at the moment I saw Halladay come out of the game, I did freak out a little probably scaring some of the people around me in attendance.  I hope this injury is not severe, as the whole Jays season flashed before my eyes, along with Halladay’s hopeful Cy Young season.

Other than the Halladay injury, the whole night did not go as planned.  The Jays were supposed to win and I was supposed to be in a jubulant mood celebrating a Friday night in the streets of Toronto.  Didn’t happen, funny how the Jays losing puts a bummer on things.  Cody Ross hits a grand slam off Brandon ‘wild thing’ League in the 8th inning.

Oh well, hopefully Halladay will ‘live to play another day’ … being listed as day-to-day.  Zing!!  Sorry, I’m mad.  Not actually mad.  I mean it in the way British people mean it.

Here is an action shot from my seats with Ricky Nolasco battling Aaron Hill. 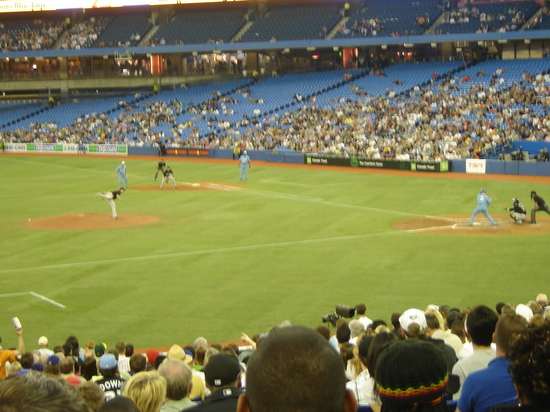 I finally graduated from McMaster University in Hamilton, Ont!  That was a long 6 years … with some breaks inbetween.  To personally honour the occasion, I made love to a Cuban cigar in a non-habit forming ritual.  Special thanks to all of you on the MLBlogs site that helped me take a break from 9-hour essay sessions at my computer.  Part of my degree is yours, but don’t hold me to that.

Photoshop design became one of the many things I picked up in school, and today I have another MLBlog to card to showcase.

Arrrrrrrrr!  We go to another University student that currently goes WVU.  His name is Matthew Peaslee and he runs a very fun Pittsburgh Pirates blog.  You can currently visit his site, The Pittsburgh Peas, and read about the parties in Pitt following the Stanley Cup that the Pittsburgh Penguins have just brought to his town.

Although Matthew’s team has been struggling since the early 90’s, and much of the 80’s, he can always reflect on the ‘We are Family‘ years with Willie Stargell and for a time Roberto Clemente (the man that was ‘bigger than baseball’).  Similar to the way I reflect on the Jays of the early 90’s.  Anyway, Matthew I hope you like the card.  Contact me if you would like me to make prints?  I’m still working on getting them.